This itinerary lets you switch between two European heavyweights, Germany and the Netherlands – alternating between wide-awake cities and picturesque towns. 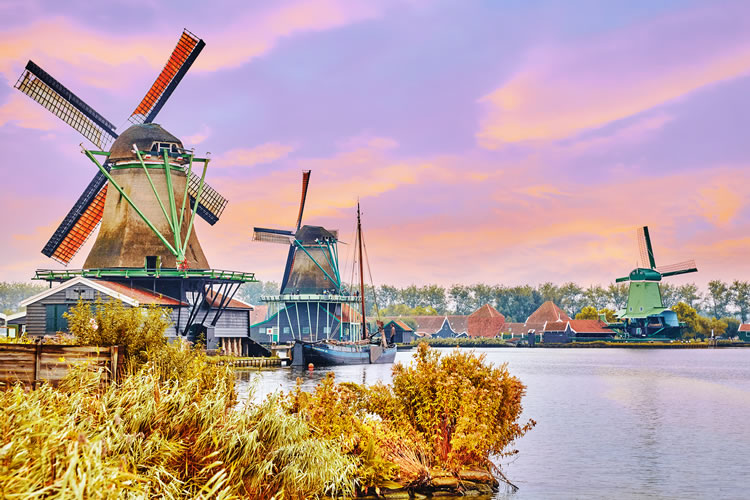 The Netherlands’ canal-laced capital is the first stop of this itinerary. This big city has a small town feel, thanks to its network of canals, cobbled streets and gabled townhouses. You’ll spend the night here, giving you time to get to know the city’s craft breweries and trailblazing restaurant scene.

You can cross Amsterdam’s top sights off your list today. Start your exploring at the Rijksmuseum, which is stocked with works by Rembrandt and Vermeer. In the street behind, there’s a bevy of museums and art galleries, including the Van Gogh Museum. Alternatively, you can learn about Heineken’s heritage at a former brewery, or cross over the canal to visit Anne Frank's House

Next, you’ll swap the Netherlands’ capital for its second city. This place was destroyed by bombing in the Second World War, but, unlike some German cities, it’s taken a different approach to rebuilding. Its futuristic, sky-high buildings and bridges are a case in point. Even its market hall is a work of art – it’s a bright, tunnel-shaped building, covered with a fruit and-veg-inspired mural. For history, head to the old harbour or the Maritime Museum.

You’ll arrive in Dusseldorf just after midday, so you’ll have the afternoon to get your bearings. Use the city’s piercing Rhine Tower as a beacon – you can see it from just about everywhere. Or rewind a few decades in the old town, known locally as the ‘longest bar in the world’, thanks to its 300 bars and pubs. You can walk off the beer on the pretty riverfront promenade, or along the tree-lined Konigsallee shopping street.

You’ll find it hard to peel yourself away from the museums at your next stop. Bonn was the capital of Germany between 1949 and 1991, but that’s not its biggest claim to fame. It’s got a handful of museums to its name – one of which is housed in the birthplace of composer Beethoven. Come afternoon, it’s worth checking out the main square, where the gilded town hall watches over market stalls and modern shops

Koblenz straddles the Moselle and Rhine rivers, so it’s easy to see why it’s always been an important city. As such, it’s got an imposing fort, which watches over the place. Today, you can reach Ehrenbreitstein fortress via Germany’s longest cable car. This place has a couple of museums tucked within its walls, covering topics like photography and archaeology. In the evening, you’ll set off on your journey towards Boppard

After arriving in Boppard last night, you’ll get the morning to take in the town in daylight. It’s one of the Rhine’s best-looking spots, with a restaurant-packed riverfront and streets seamed with half-timbered buildings. In the afternoon, you’ll move on to Oberwesel, just down the river. You’ll have a few hours in this so-called Town of Towers. It got its nickname from the 16 towers still standing from the town’s original Medieval walls.

You’ll pull into Frankfurt nice and early, so you can pack in some sightseeing before your trip home. If you’re short on time, the Ebbelwei-Express is a great, whirlwind introduction to the city, stopping at 29 landmarks in an hour. Plus, you can combine sightseeing with a tasting of Frankfurt’s famous apple wine, which is included in the ticket price. It doesn’t get much more German than that.

Terms and conditions apply, all offers are subject to availability and operator booking conditions. Fares shown were correct at time of print, but are subject to change. Fares are per person based on 2 people sharing a stateroom. All savings have been applied to fares displayed. *Savings of £200 per booking are valid to selected March to October 2020 river cruises booked by 29th February 2020. *Savings of £300 per booking are valid on 2020 river cruises departing between 29th March & 31st May 2020 booked by 29th February. We charge a one-off small £20 booking fee. That’s it - nothing more and no add ons when you pay the balance. ABTA P6710 E&OE.