Lisbon and the Douro Valley

Lisbon and the Douro Valley 2019 All Inclusive Saga River Cruise

This cruise aboard Douro Queen includes a three-night stay in Lisbon, followed by a scenic journey through the Douro Valley, taking in the best the region has to offer – from the wine cellars of Oporto, to the exquisite gardens of Mateus Palace. 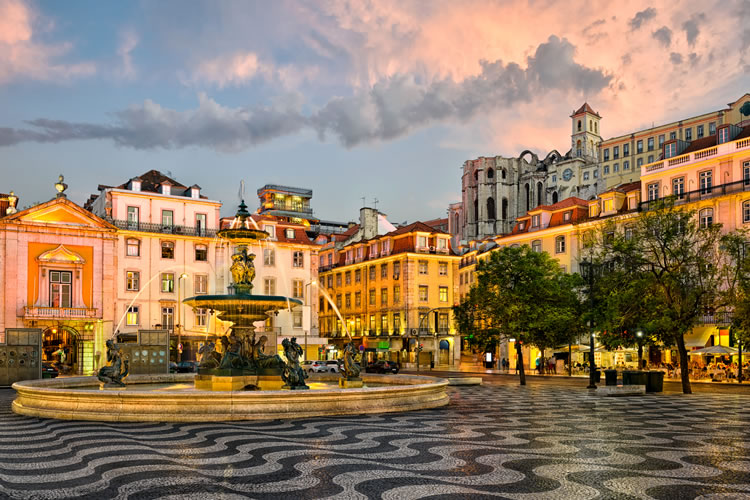 Fly to Lisbon and transfer to the locally rated 4-star Hotel Mundial (4Q) for a three-night stay on a bed and breakfast basis, with dinner included tonight. The hotel is set right in the heart of Lisbon in the elegant Baixa Pombalina district, overlooked by medieval St George's Castle.

Discover this historic city on an included morning tour. See the Belém Tower, a Moorish fortification on the banks of the Tagus river that once protected the city from pirates, and the nearby Monument to the Discoveries featuring 33 figures from the Portuguese Age of Exploration on the prow of a ship.

At leisure. Perhaps visit the intricate Jerónimos Monastery, or stroll through the quirky sloping streets of the Bairro Alto district.

Day 4: Lisbon to Coimbra to Oporto

Journey north to Oporto, stopping at the historic city of Coimbra for an included tour and lunch. The city was once the capital of Portugal and the university here is one of the oldest in Europe. Continue your journey to Oporto where you'll board your ship, the Douro Queen, moored in Vila Nova de Gaia, on the south bank of the Douro.

Day 5: Oporto to Régua to Pinhão

Your cruise continues to Régua, arriving before lunch. This afternoon, travel by coach to Lamego, one of the most attractive cities in Portugal. See the elaborate Sanctuary of Nossa Senhora dos Remédios, which is set atop nine steep terraces overlooking the town. There’ll be free time to explore this impressive baroque church and visit the lovely Gothic cathedral, which in parts dates back to the 12th century! This evening there’ll be an included trip to a local vineyard for dinner, with wine and entertainment included. Re-join your ship in Pinhão.

Depart Pinhão early this morning and take in the scenery as you sail towards Vega de Térron. This afternoon, join an included excursion to Figueira de Castelo Rodrigo, a small medieval village with a stunning hilltop location. See the 18th-century baroque church and stroll around the village in your own time. Back on board ship look forward to a traditional Portuguese dinner.

Today join an included excursion across the border to the city of Salamanca in Spain, a UNESCO World Heritage Site famed for its beautiful old university buildings of golden-coloured stone. The journey here usually takes about two hours, during which your guide will give an interesting talk on Spanish history. After half an hour of free time join a walking tour with a local guide to the magnificent Plaza Mayor, one of the finest town squares in Spain. You also see the famous cathedral, built in two parts. The original Catedral Vieja, which dates from the 12th century, is now incorporated into the much larger 16th-century Catedral Nueva. Lunch will be served at a local restaurant, followed by a flamenco show to give you a taste of traditional Spanish culture. Return to the Douro Queen which will now be in Barca d’Alva and moor overnight.

Depart Barca d’Alva and enjoy the wonderful views as you spend the morning sailing towards Pinhão, arriving after lunch. This afternoon pay a visit to Quinta do Seixo, a local winery. Here you’ll join an included tour of the estate, followed by an opportunity to taste their port wines. This evening there’ll be an included trip to another local vineyard for dinner, with wine and entertainment included. The ship remains moored in Pinhão overnight.

Day 9: Pinhão to Régua to Entre-os-Rios

Sail from Pinhão to Regua early this morning. From here an included excursion visits Mateus Palace gardens. Your guide will give you an introduction to the palace, one of the loveliest country houses in Portugal and which famously features on the Mateus rosé wine label. Explore these exceptional formal gardens as well as admiring the exterior of the palace. Enjoy the afternoon at leisure on board as the Douro Queen departs Régua and look forward to a traditional Portuguese folk music show after dinner. Moor overnight in Entre-os-Rios.

Spend the morning at leisure as you sail back towards Oporto. Learn the history of Portugal’s second-largest city on an included tour. This famous centre of port wine production is beautifully located on the Douro estuary. The coach tour includes a visit to Sé Cathedral, which dates from the 12th century, and is where Phillipa of Lancaster married King Joao I of Portugal in 1387 becoming the first and only English queen of Portugal. Your tour also includes a visit to a port wine cellar where you’ll learn about the production of this famous drink and enjoy a tasting. Remain moored in Vila Nova de Gaia overnight.

Disembark after breakfast and travel to the airport for your return flight home.

Terms and conditions apply. All offers are subject to availability and operators booking conditions. Prices are per person based on two passengers sharing the lead in grade stateroom unless otherwise stated. All discounts have been applied to fares displayed. Offers may be withdrawn or changed at any given time. We charge a one-off small £20 booking fee. That’s it - nothing more and no add ons when you pay the balance. E&OE. ABTA P6710.