Commencing in the Roman city of Oporto, the home of Port wine, Portugal’s once wild river Douro has been tamed by locks into resembling a series of finger lakes, adding greatly to the valley's ambience. Leaving behind the Atlantic influenced greenery of the coast you are soon immersed in a Mediterranean land of olives, vines, and picturesque, medieval hilltop villages. Your destination is the higher reaches of the valley from where you visit Salamanca - home of one of Europe’s oldest universities, two of its finest cathedrals, Spain’s finest city square and even the Inquisition! 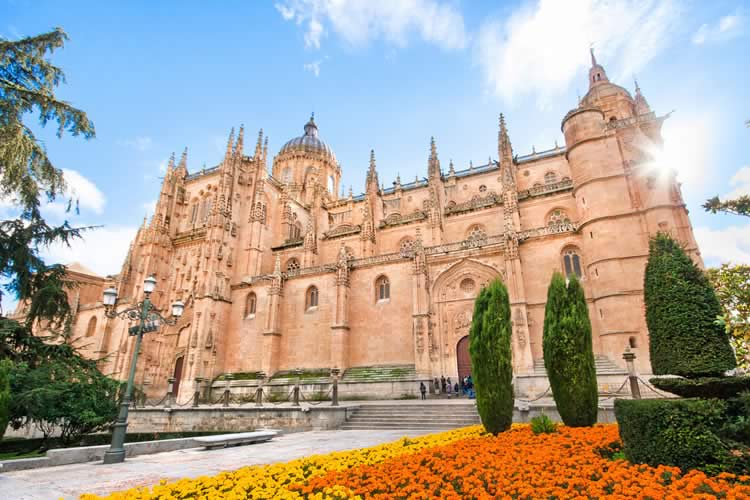 On arrival at Lisbon or Oporto airport you will be met and taken to your ship in Oporto. Here her attentive crew will welcome you aboard ensuring you settle into your comfortable and extremely well equipped cabin and familiarise yourself with the ship, your first-class floating hotel.

As dawn breaks the ship slips quietly away from Oporto and you will awake to the gentle sound of water lapping against the sleek hull and that most relaxing of travellers’ joys as you witness the ship’s stately progress upstream. Your first breakfast, you will be welcomed in the restaurant and immediately spoilt for choice, with the omelette station being a real favourite of many! Even on the first day it is so apparent that the Douro is one of Europe’s most photogenic river valleys with tourism being almost completely undeveloped. Late morning, the ship approaches its first port of call at one of the river’s few small towns, Peso da Régua. The observant will have already noticed that the lush covered hillsides have largely given way to an intricate patterned landscape of steeply terraced vine covered slopes, as you enter port wine territory. The climate has evolved too; leaving the Atlantic behind it is noticeably warmer and dryer. The topography has a much more Mediterranean appearance with browns and ochres replacing verdant greens. This afternoon, take a short drive along sinuous roads to historic Lamego, home of Portugal’s sparkling wine Raposeira and one of the first places to be re-conquered from the Moors in the 12th century. Situated on top of the hill overlooking this lovely town is the ancient Sanctuary of our Lady of Remedies church, its stairways adorned with attractive azulejos, the country’s famous painted tilework. Enjoy a little indulgence as you visit one of the region’s best quintas (vineyards) learning how legendary port is produced – culminating in a tasting of the delicious final product!

The Douro was once a precariously wild river, rendering navigation extremely tricky for the traditional flat bottomed boats which often foundered. Today the river has been tamed by a series of locks and you navigate several of them; always intensely fascinating, the resultant almost loch-like river topography really enhances the valley’s charm. Cruising into evermore rural territory towards the Spanish border, the river here is at its most peaceful, a perfect time to take a refreshing dip in the pool, or catch up on some reading perhaps with a cool pre-lunch glass of local vinho verde white wine. It’s worth mentioning Portuguese wine is really outstanding but as the production is not huge, the higher quality wines tend to be consumed locally, so if you are a wine aficionado, experiment a little – you are in for a real treat! You are now on the River Duero, as you have crossed into Spain, however the northern bank remains in Portugal! This afternoon visit Castelo Rodrigo, a delightful 12th century walled village tucked away in the peaceful border hills, whose church was a resting place on the pilgrim route to Santiago de Compostela – indeed it is said that St Francis himself stayed here. Perched on a hill, the views are simply stupendous - stretching across almost deserted ochre-coloured hillsides. This evening enjoy a delicious, typically Portuguese barbecue, served on the sundeck (weather permitting) as the unmistakable sound of crickets and scents from the surrounding hillsides pervade the warm evening air.

Today visit historic Salamanca, a UNESCO World Heritage Site, acknowledged by many Spaniards as one of the country’s most beautiful cities and once seen it really is difficult to disagree. Renowned for the gorgeous rose-coloured hue emanating from almost universal use of local sandstone for its construction, the city appears to glow. Perched on a small hill on a bend in the serene River Tormes, it is a picture of tranquillity but, founded by the Romans, who built the still used 400 yard long bridge, Salamanca was repeatedly fought over by Hannibal, the Moors then the Duke of Wellington and Napoleon. Salamanca is dominated by its two cathedrals and Spain’s oldest university founded in 1215, which for four centuries was one of the civilised world’s most important seats of study. The Spanish Inquisition’s records are still kept here, and as early as the sixteenth century it boasted some twelve thousand students. You can see beautifully preserved lecture halls with their vaulted ceilings and you can imagine Christopher Columbus addressing the most learned men of the day or legal experts constructing the international laws originating here. Over lunch you enjoy a traditional flamenco show, then explore as you wish. Whilst the buildings themselves dominate the skyline, their internal decoration is just as exceptional. Visit the two cathedrals – the more recent dates from the 16th century! Salamanca is a wonderful place to just wander through: tiny streets, medieval squares, traditional shops, gardens and marketplaces all add to its atmosphere. The main square, the Plaza Mayor, is widely acknowledged as Spain’s finest and the hub of Salamantine life, with plenty of cafés and places to sit and watch the locals go by whilst absorbing the lovely atmosphere.

After another superb lunch on board, cruise into the small town of Peso da Régua, from where you visit the grounds of the splendid Mateus Palace. Anyone familiar with Mateus Rosé and its characteristic ‘squashed’ bottle will recognise the palace from the label. Whatever your opinion of the wine, it is an impressive 18th-century Baroque edifice, mirrored in its stunning pond, surrounded by landscaped French gardens.

This evening take the short drive to the 126-acre Quinta da Pacheca for dinner. Enjoying dramatic views over the Douro, it dates back to the 18th century and is simply one of the most beautiful and distinguished properties in the region. It is also notable as being the first quinta – in 1738 – to bottle wine under the name of its owner, the aristocrat Mariana Pacheco Pereira. You have time to wander through part of the estate before sampling a selection of its finest wines at dinner.

This morning after breakfast take a short drive to historic Lamego, home of Portugal’s sparkling wine, Raposeira, and one of the first places to be reclaimed from the Moors in the 12th century. Situated atop the hill overlooking this lovely town is the ancient Sanctuary of Our Lady of Remedies church, its stairways adorned with attractive azulejos, the country’s characteristic painted ceramic tiles. Later we enjoy a little indulgence as we visit one of the region’s best port quintas, or estate-vineyards, to learn how the legendary fortified wine is produced. This experience culminates in a much-anticipated tasting of the delicious final product.

This evening is the Captain’s Dinner, a truly memorable experience featuring exquisite regional specialities, followed by a colourful performance of traditional Portuguese folk music by a local cultural group.

Porto is of course synonymous with wonderful port wine and all the famous port producers are here, such as Cálem, Sandeman and Ferreira, so a visit here would not be complete without a tour of one of them. You’ll learn about this fortified wine’s fascinating history and its close British connections. Port is made from grapes still pressed in the traditional way – by feet – then lovingly matured, sometimes for decades, before you can enjoy its subtle flavours. Of course, you’ll get the chance to sample various port styles at the end of our visit.

This evening, enjoy a final dinner on board expertly served by our restaurant staff under the supervision of the maître d’. Afterwards, perhaps settle into the lounge to chat into the evening and reflect on the splendours of the remarkable River Douro – over a glass of port, of course.

After a final breakfast you will be transferred to the airport at the appropriate time, refreshed and revitalised, with memories of one of the most unspoilt corners of Europe to savour for a long time to come.

Extend your stay, pre or post cruise, with these great value cruise extensions! Simply give our award winning team a call for full details on 0800 810 8220